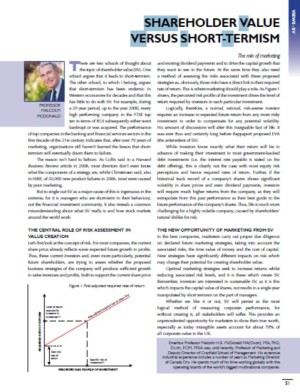 The role of marketing – By Professor Malcolm McDonald

There are two schools of thought about the topic of shareholder value (SV). One school argues that it leads to short-termism. The other school, to which I belong, argues that short-termism has been endemic in Western economies for decades and that this
has little to do with SV. For example, during a 20 year period, up to the year 2000, every high performing company in the FTSE top ten in terms of ROI subsequently either went bankrupt or was acquired. The performance of top companies in the banking and financial services sectors in the first decade of the 21st century indicates that, after over 70 years of marketing, organisations still haven’t learned the lesson that short-termism will eventually doom them to failure.

Be the first to review “Shareholder value versus short -termism” Click here to cancel reply.