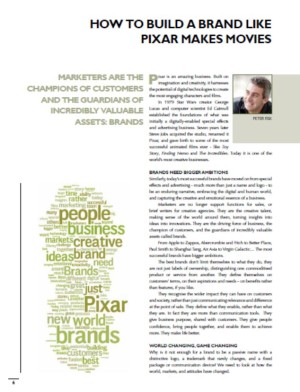 How to Build a Brand like Pixar makes Movies

Marketers are the champions of customers and the guardians of incredibly valuable assets : brands .. By Peter Fisk.

Pixar is an amazing business. Built on imagination and creativity, it harnesses the potential of digital technologies to create
the most engaging characters and films. In 1979 Star Wars creator George Lucas and computer scientist Ed Catmull established the foundations of what was initially a digitally-enabled special effects and advertising business. Seven years later Steve Jobs acquired the studio, renamed it Pixar, and gave birth to some of the most successful animated films ever – like Toy Story, Finding Nemo and The Incredibles. Today it is one of the world’s most creative businesses.

Be the first to review “How to Build a Brand like Pixar makes Movies” Click here to cancel reply.