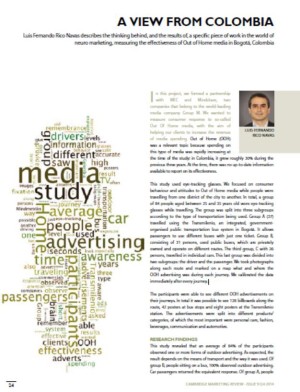 A View from Colombia

Luis Fernando Rico Navas describes the thinking behind, and the results of, a specific piece of work in the world of neuro marketing, measuring the effectiveness of Out of Home media in Bogotá, Colombia

In this project, we formed a partnership with MEC and Mindshare, two companies that belong to the world-leading media company Group M. We wanted to measure consumer response to so-called
Out Of Home media, with the aim of helping our clients to increase the revenue of media spending. Out of Home (OOH) was a relevant topic because spending on this type of media was rapidly increasing at
the time of the study: in Colombia, it grew roughly 30% during the previous three years. At the time, there was no up-to-date information available to report on its effectiveness.
This study used eye-tracking glasses. We focused on consumer behaviour and attitudes to Out of Home media while people were travelling from one district of the city to another. In total, a group of 84 people aged between 25 and 35 years old wore eye-tracking glasses while travelling. The group was split into three subgroups according to the type of transportation being used. Group A (27) travelled using the Transmilenio, an integrated, governmentorganised public transportation bus system in Bogotá. It allows
passengers to use different buses with just one ticket. Group B, consisting of 31 persons, used public buses, which are privately owned and operate on different routes. The third group, C with 26 persons, travelled in individual cars. This last group was divided into two subgroups: the driver and the passenger. We took photographs along each route and marked on a map what and where the OOH advertising was during each journey. We calibrated the data immediately after every journey.

Be the first to review “A View from Colombia” Click here to cancel reply.